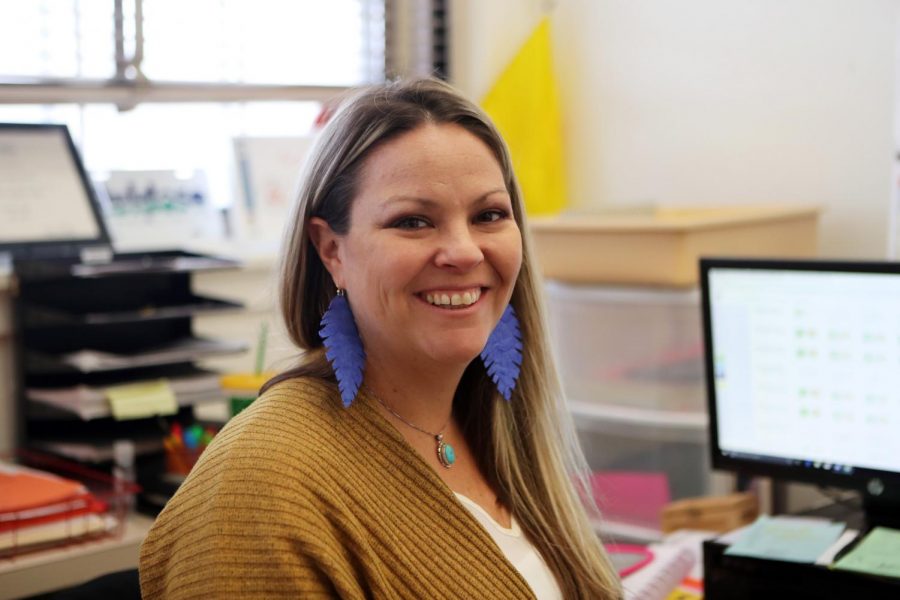 El Paso High School has always been rich in tradition, school spirit, and pride. New changes came this school year with the new Student Activities Manager, Lindie Serna, as she took on the position that hadn’t been replaced in 20 years.

Former Student Activities Manager, Susan Macias, retired after this past summer after being at EPHS for two decades.

Mrs. Serna has been a teacher for over 16 years, the past 12 at El Paso High School, teaching Life Wellness Nutrition, and Food Science before she took on this new role that she said changed her career for the better.

Over the summer, she had to transition into a new room, and said, “It was overwhelming.” Mrs. Serna also said that she has wanted to do this for years. Having that mindset gave her an easy transition.

“I’m busy, but it’s a good busy, it’s an exciting busy,” Mrs. Serna said as she describes her emotions over this new position.

As of now, one of her main goals is for the students on campus get more involved. She has many projects and plans set for this school year, but for now, the month of September had been pretty busy.

One of the many events that was planned for September was hosting “Movie on The Hill,” in then screening of “Glory Road,”, as the film ties into the city of El Paso and the ‘Lady on The Hill.’ This event took place on Sept. 30 at the football field of Jones Stadium.

“It’s open to the community, we’re selling concessions, and all the proceeds will go to prom,” Mrs. Serna said. as she talks about the event.

The class of 2018 had a few words to share about Mrs. Serna on how she’s handling the job, and some of the changes they’ve seen so far.

“I think Mrs. Serna has been handling this new position really well. I know she was here all summer cleaning out multiple rooms. senior, Analisa Quinonez said. Her job has so many activities and responsibilities that she has to do, and I think she’s doing a really good job considering it’s her first year and she’s having to learn everything.”

For most seniors, Mrs. Macias had been at EPHS since their freshman year, but change was something that many were open minded about.

“I think what we needed was something new and someone who is willing to listen to what the students have to say, and also teachers and staff,” senior, Vivian Herrera said.

The change in direction has students excited for the unexpected, although many of the traditions will continue, Mrs. Serna and students are looking forward to adding new traditions to the fold.

Sticking with tradition, or even improving it, Mrs. Serna has already marked her territory and has got many students more involved in different areas. The changes and adaptation will stay in line with traditions as she develops them and attempts to make them better.

“I guess we all have different pride because you know Mrs. Macias would always know what to do, and with Mrs. Serna it’s new and exciting so I think her being new there’s more ideas and it’s very fun,” senior, Sandra Maciel said.