The ghost that keeps on giving 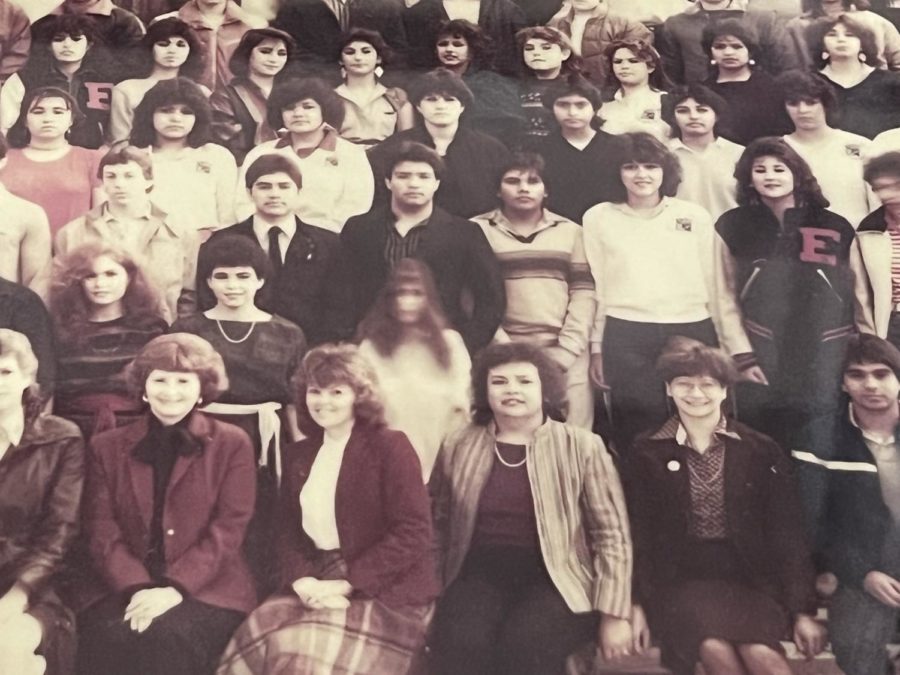 The panoramic photo of the EPHS class of 1985 shows what appears to be a young woman in a white gown blurred out in what has become known as the ghost of El Paso High School.

One dark night, two students at El Paso High School were in the gym locker rooms during a football game. Everything seemed normal until one of the shower curtains started rustling.

For sophomores Meg Inzer and Mia Fierro-Vega, it felt like someone was there with them, but Meg and her friend were 100 percent sure that they were the only ones there.

Overcome with fear, they ran out of the locker room without bothering to check if someone was there.

“I felt really freaked out,” Meg said. “I didn’t want to stay any longer and have the IT clown pull me away.”

Once they were back under the bright lights of the stadium, everything felt normal but thoughts of what happened kept racing through their heads.

“When we tried to tell someone no one believed us,” Meg said. “It was aggravating because I know what I saw.”

Not only are the students having weird experiences but so are the teachers. A story from Ms. Jessica Silva, the school librarian, has left many with chills. During the time Ms. Silva was attending El Paso High School, Ms. Silva’s friend was roaming the hall on the fourth floor.

While using the restroom she heard water running. When she left the stall, she saw all the sinks had been turned on. She knew that she was the only one there. After many years, they’re still confused about what happened.

She doesn’t know who, or what, turned on the sinks. It could’ve been that another student was the cause, but was that really it?

Already freaked out from her friend’s experience, Ms. Silva is thankful that the library is separate from the main building. However, this hasn’t stopped the supernatural occurrences. One day she was talking with a student when they heard a loud thump coming from the shelves.

“Oh my God!” Ms.Silva recalls the student shouting. “Did you see that?”

It’s not just the first and fourth floor that can be described as creepy. One place where paranormal activity is common is the auditorium. Mr. Mark Paz, the Principal of El Paso High, was in the auditorium with Ms. Lindie Serna, the Student Activities Manager, when he saw a ghost get up from the top section of the auditorium and walk out.

After telling Ms. Serna what was wrong, she was unable to say that she had seen the same, but she still believed what he had seen. Even though there was no one else who saw the ghost that day in the auditorium, Mr. Paz believes with every ounce of his being that there was a woman who got up and walked out.

“I do know I’ve been with principals and teachers who have seen ghosts,” Ms. Serna said. “I believe them.”

Many others have supposedly had encounters in the auditorium and the new theater director, Mr. Jacob Rodriguez, is no exception.

One night when all the lights were off, Mr. Rodriguez came in looking for something that he had left earlier in the day. While walking towards the stage he felt as if someone was watching him.

With goosebumps on his neck, he turned around and saw a figure sitting in one of the chairs. Bewildered by what he was seeing, he pulled out his phone and snapped a picture.

“I was terrified,” Mr. Rodriguez said. “I mean it was creepy.”

Some say that it’s ghosts; others say it’s just your imagination.  While many teachers and students have said that they have experienced something, there’s no proof as to what is going on.

“I’ve learned to always be prepared,” Meg said. “Always be on the lookout because you never know when something’s gonna come up behind you.”