Fine Arts ready to rock at the holiday extravaganza 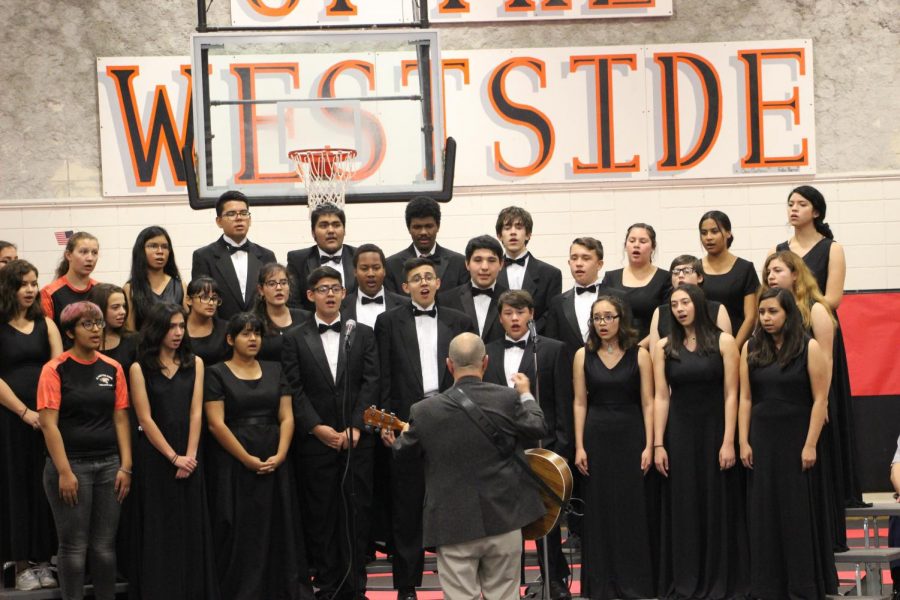 Holiday season is upon us, which means it’s time for the El Paso High School’s annual holiday concert.

The holiday concert is a showcase of all of the fine arts programs the school has to offer, where they get to display all of their hard work  from this past semester.

“I’m most excited for playing in the El Paso High’s auditorium. I think that the best auditorium I’ve ever had, when it comes to performing concerts at the school. It a really nice auditorium,”Band director,  Ricky Vilardell said. “Usually, my experience  is having Christmas concerts in gyms.”

“We are preforming an arrangement of ‘Greensleeves’,” Mr. Vilardell said. “It’s a traditional Christmas tune, and as far as our part goes that the only piece we will be performing just as a band.”

The choir will be performing two classic sing-along songs at the concert.

“We are going to be singing ‘Baby It’s Cold Outside’ and ‘Gettin’ In The Mood For Christmas’ which is a takeoff of the song ‘In The Mood’, but the one Brian Setzer and The Stray Cats put together,” Mr. Thompson said. “We had the opportunity to perform these two pieces with all the choirs in the district, and I thought they would go really well for our holiday program as well.”

“We are doing ‘Silent Night’, and then we are also doing ‘Oh Holy Night’,” Orchestra instructor, Eric Rangel said.  “Everybody knows them and they’ll be familiar with them and it something they will enjoy, plus they’re great arrangements.”

The fine arts staff has been wanting to do a full symphony piece for sometime now. With the coming of a Mr. Vilardell and Mr.Rangel, they were able to work together and plan out a piece to play at the upcoming concert.

“Mr. Thompson, Mr. Rangel, and I have been wanting to do this since I got here,” Mr. Vilardell said. “Our thing is that the more opportunities we can give the students to play in different settings, that just going to make them better musicians.”

The El Paso High’s holiday concert is more than just a showcase of the fine art program at the school. It signifies a time of collaboration between different fine art programs . It’s also a chance for teachers to meet student’s family and friends.

“It’s an opportunity for all our disciplines to collaborate and come together and work as a team on something, not only as a staff, but also our students,” Mr. Thompson said. “It makes us realize we are part of something bigger than just our own disciplines.”