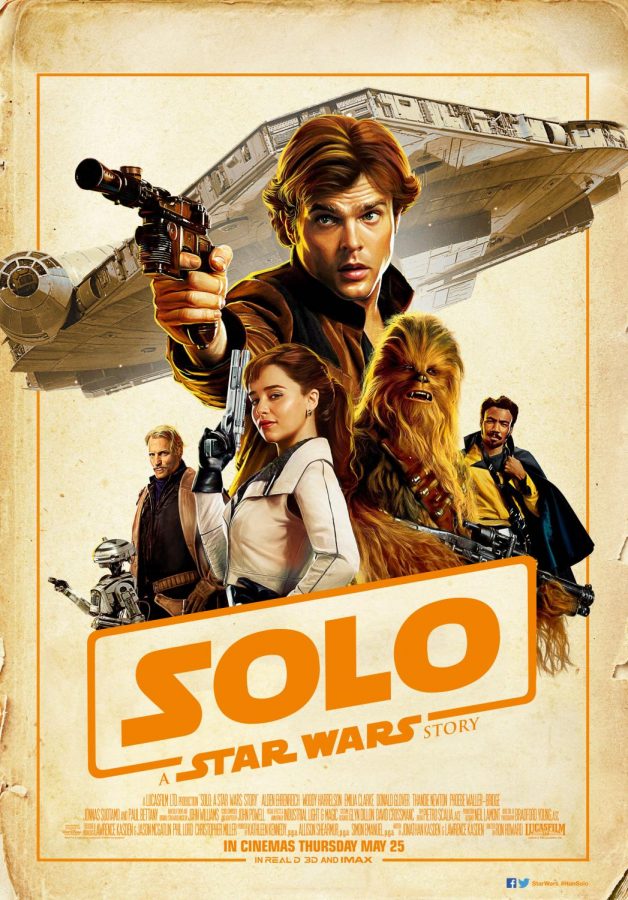 Solo: A Star Wars Story is the newest entry in the beloved Star Wars franchise and was directed by Ron Howard. Although the movie switched directors throughout its development, Ron Howard gets the credit. The film is centered around an excellent cast of Alden Ehrenreich as Han Solo, Donald Glover as Lando Calrissian, Emilia Clarke as Qi’ra, and Paul Bettany as Dryden Vos.

The plot of the film is somewhat muddy, but in the end it is really about a crew of characters making the legendary Kessel Run we here about in A New Hope. The journey is exciting and fun to see, however there are so many hanging threads by the end that make Solo the least self contained Star Wars movie by far. It is so obvious that Disney is using this movie as the beginning of a new series in the Star Wars universe that it largely confuses the movie as a whole. The audience is shown things that set up events and questions that are never explained or answered by the end of the 135-minute running time.

Although I enjoyed to plot of the film, the film could have benefitted from multiple edits to the script, written by Lawrence and Jonathan Kasdan. Another odd aspect of the script is that there is no real villain in the film. Because the story revolves around crime syndicates, there are many malicious figures throughout, but none of these individuals get enough screen time or real impact on the story to be considered a villain in my mind. The way that Chewbacca, Han Solo, and Lando Calrissian meet for the first time is neat and fun and is one of the better parts of the story.

Moving from the story, the acting is remarkable. Ehrenreich and Glover play off of each other in delightful ways and Bettany’s portrayal of Dryden Vos is exciting. Out of all the villainous characters, Dryden Vos is the most explored. After hearing horror stories about Ehrenreich’s acting and the need for an acting coach, I was nervous about his portrayal of one of the most iconic Star Wars characters. However, Ehrenreich does a good job of showing us a younger and more naïve Han Solo that is hardened throughout his development until we begin to see glimpses of the inevitable charming curmudgeon that the character is in the later films. Lando has never been more exciting or likeable than in this film. Donald Glover is still one of the most talented people in Hollywood and he really shines in this character, although I would’ve enjoyed seeing him more.

In addition to great interpretations of new and existing Star Wars characters, is the fresh look of Solo. This movie looks like no other Star Wars movie with excellent robust landscapes and far more colorful and stylized scenes. There is not much to say about the cinematography besides that it is excellent, with the exception of a reliance on the tilted Dutch Angle during one particular sequence.

The score composed by John Powell and series veteran John Williams is fresh in many ways while it still calls back to iconic tracks such as The Imperial March and Duel of the Fates. The only issue that I had with the soundtrack and sound in Solo was that the mixing felt awkward in some sections. Sometimes the music was too quiet and robbed a scene of intensity where in other scenes, the score was overbearing and obnoxious. Although, for most of the movie the score is another great entry in the Star Wars saga.

Overall, Solo was very enjoyable and fun to watch. There are issues with it and the lack of focus is infuriating at times, it is exciting, with great acting, composition, visuals, and writing. Better than the prequels, but not quite as impressive as Rogue One, the only other Star Wars spin off film so far.