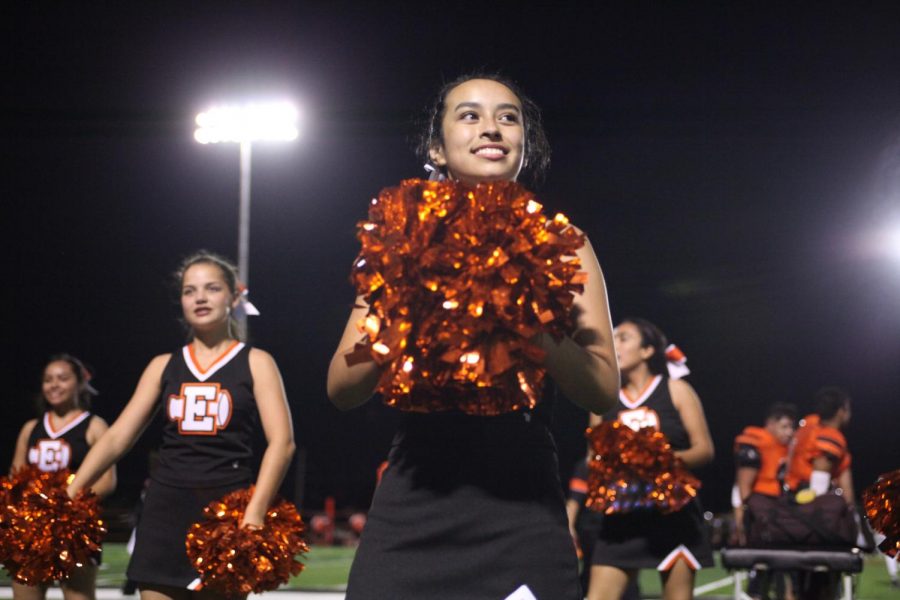 Freshman, Mariana Retana, cheers during a football game of the 2017 season.

As cheer tryouts roll around again, a new batch of students eagerly participated in hopes of becoming part of the EPHS Tiger varsity and junior varsity cheer squads.

“Now that the school year is winding down I’m getting more emotional about leaving the squad,” senior captain, Analisa Quinonez said.

Fifteen students made both teams for the 2018-19 school year.  This upcoming squad will be different from the previous due the addition of a boy to the squad, the first since 2015.

“Having a boy will make our squad stand out,”sophomore, Natalia Lowe said. “Because not every squad has a boy. It’s cool to stand out and be different and with a boy on the team our squad will be set apart from the rest.”

Tryouts were a week-long process where the girls learn a dance, a chant, a cheer and two jumps that the senior cheerleaders have created. On the last day of the week, the girls and boys show off everything they have learned over the course of the week at try outs.

“To try out for cheerleading, it takes determination and potential,” Lowe said. “To work hard to be a cheerleader even if you don’t have past experience.”

Incoming freshmen and students currently enrolled at El Paso High are allowed to try out for the cheer squad.

“I was not a cheer leader this year,” freshman, Angie Chavez said. “However, I wanted to try out for next year because I want to encourage everyone to be proud of our amazing school.”

Learning all the chants and routines takes a great deal of commitment and dedication. For some of the students, these tasks were easy to grasp due to their previous involvement in cheer outside of school or in middle school.

“Doing competitive cheer is really hard,”freshman, McKenzie Velasquez said. “It made learning the cheers and dances a lot easier for me during try outs this year.”

El Paso High has over 100 years worth of tradition and being a cheerleader at this campus means many things such as having an unconditional love and support for our school and everyone who attends.

“Cheer here means you’re a representation of the school,” sophomore, Lilianna Mares said. “everyone sees you as their biggest supporters.”

Most students trying out, like incoming freshmen Catalina Ohnmacht, have been aspiring to be cheerleaders since they were little.

“My cousin used to cheer at Clint High School and I always thought that was so cool. I knew I was going to come to El Paso High and be a cheerleader here since I was seven.”