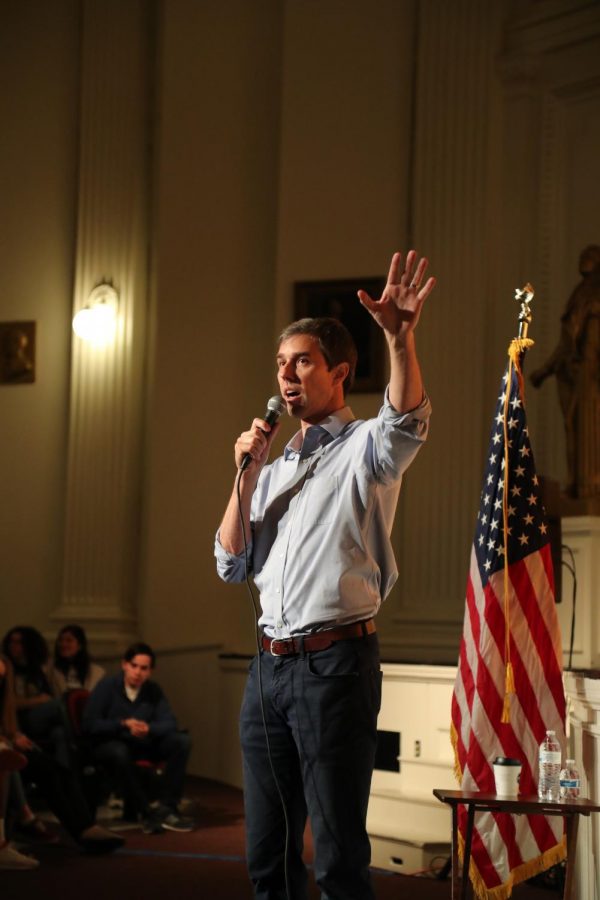 Congressman Beto O’Rourke visited El Paso High School on March 2 for a town hall event, just days prior to winning the Democratic primary election for the U.S Senate, where he’ll now face-off against Republican Senator, Ted Cruz for the seat.

He began by discussing his time spent here at El Paso High when he was in high school. Congressman O’Rourke told a few anecdotes about the school before transitioning into the subject of school shootings.

This was in response to the recent Parkland school shooting. After introducing himself and briefing discussing gun control, students and people from the community began lining up to ask question and make their voices heard. Some students asked about gun control, some students said they didn’t feel safe at school and some people asked about psychological research and screenings.

After the first round of questions for the Congressman, there was a brief debate between two veterans: one that opposed the NRA(National Rifle Association) and one that was a member. This was a strong portion of the town hall because it showed that Congressman O’Rourke was a politician that listened to all sides of a conversation to try and reach a compromise, which is a principle he is taking into his campaign for Senator.

“We’re going to every county in Texas and listening to people and meeting with them and respecting them and showing them this common courtesy of being with them in their communities,” Congressman O’Rourke said. “I think it’s allowing us to build support amongst folks who might traditionally not think about voting for a democrat.”

This town hall meeting focused on his work as a Congressman and what he wants to accomplish before leaving his position in November. After the town hall, I interviewed the Congressman about his senatorial campaign.

“Some of the big differences are we aren’t taking political action committee money which can mean millions of dollars in a senate campaign that can cost tens of millions of dollars to run,” Congressman O’Rourke said. “So, leaving that money on the table and not taking it could sound like it could handicap us in this race but its turned out to be one of our greatest strengths.”

This means that, as opposed to other campaigns, Congressman O’Rourke’s runs totally off donations. He is also the only Senator candidate who has not taken money from the NRA. This senatorial campaign is one of the biggest political underdog story right now because O’Rourke has been so successful in keeping up with opponents who are receiving money from PACs and the NRA.

“So many tens of thousands of people have donated to the campaign, 15, 25, 50 bucks at a time and we’ve out raised the sitting junior U.S. Senator in the process,” Congressman O’Rourke said.

It was exciting to see the Congressman revisit the school he attended and inspire a new generation of politicians. However, some students believe Congressman O’Rourke dodged some questions, especially regarding gun control.

“I honestly think that he tip-toed around [my question] a lot and didn’t answer it directly,” Junior Camila Abbud said.

Camila asked a question about the move to arm teachers in case of a school shooting scenario.

Other students seemed content with what the Congressman said and were excited to see him.

“I think he was for the most part very effective in his questionnaire and in his ability to answer our questions,” Senior Finn Slavin said. “When it came to the more complicated stuff you could tell he didn’t want to talk about I wish he would have really expressed that more.”